A guest blog by KenFerm

It is with no pleasure that I must say that whilst I was disappointed, I was not surprised, that FST was lost to nationalism, with Unionism once again donning the triumphant cloak of righteous entitlement.

The outcome was always on the cards given the dynamic being played out at home, hearth and meeting place. 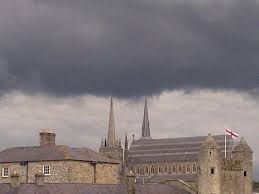 Human nature being what it is, hope swirled expectantly in hearts even though the cool mind said otherwise. It’s still a bitter, hard pill.

The dreary steeples of Fermanagh and Tyrone still stand proud and strong, the mist has swirled and, for now, cast an orange glow……  until the next time.  All Change and No Change.

The factors that combined in 2010 were:

I would argue the factors this time that combined were:

The electoral cycle turns and the dreary steeples shall remain unbowed, waiting for the next chapter of our placid yet deeply earnest contest.

The next contest for this Westminster seat starts now. The clock is ticking for Tom.

The campaign must start with an honest and detailed look at the underlying reasons behind the voting pattern & turnout.

The defeat can in turn be a motivating factor for nationalists; any misstep on fair play, equality, and triumphalism should be noted and stored for later use.

Engage, with honesty, voters in all their complexity, building consensus and alliances, across the broad range of nationalist opinion.

Campaign relentlessly on local issues, be seen to deliver on local needs and to offer hope and a desire to expect better.

Some other points that I think are worth mentioning.

With a Tory majority there will be a boundary commission that will recast the number and boundaries of constituencies. The realignment will not be kind to nationalism. It is in the common interests of Unionism and the Tories to ‘finesse’ the outcome.

Both SF and SDLP should or more importantly, need, to work together to counter this common threat. SF must not be tempted to play the ‘bash SDLP’ card. The Westminster boundaries and number of NI seats will determine the future shape of the Assembly. It was a strategic mistake to agree in a reduction of MLA’s per constituency before the review was concluded. SF’s over-riding objective should be to maximise the nationalist number of MLAs not just their own numbers. Both parties need to work together, on closely detailed policy and effective number crunching to ensure the best result for nationalism (and both parties).

With an English Tory majority, we now have English rule. An English rule that is harsh, right-wing and tied to a neo-con agenda. The Irish are naturally fair-minded, socially responsible with a desire for social solidarity.

It is an opportunity to shape opinion and sentiment.

The union has so far failed and will continue to fail all of us.

We deserve a better future.