And so onto the next in the series. I’ve long been curious about Antrim in particular as I consider it a changing town. Over to Faha: 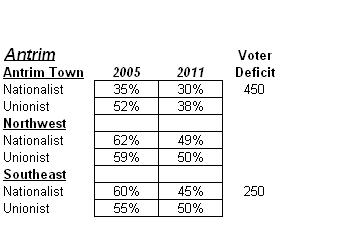 The election turnout for the 2005 and 2011 elections indicate:

#3 Almost 2,500 additional nationalist voters would have had to vote in 2011 in order to equal unionist turnout.

#4 In the 2011 Assembly election, nationalist voter apathy (approximately 1,400 voters within the boundaries of the South Antrim constituency), resulted in the defeat of the SDLP candidate, who lost by approximately 1,200 votes.

#5 Nationalist voter apathy in the Macedon and Antrim Line DEA’s also affects the North Belfast Westminster election. There is approximately a 700 vote nationalist voter deficit within the boundaries of the Newtownabbey section of North Belfast, which is 1/3 of the votes by which Gerry Kelly lost his election to Nigel Dodds in 2010.

The percentage change in the party vote between 2005 and 2011 is as follows:

For Newtownabbey, the SDLP vote decline in Antrim Line DEA defected to SF. The increase in SF and SDLP vote in University DEA is entirely due to the fact that the 2011 election is the only election in which SF and the SDLP have competed here. The SDLP decline in Macedon is entirely due to no candidate and the 2005 voters voted SF or Alliance. The increased Alliance vote is mainly due to UUP voters who have defected to Alliance, which accounts for the decline the UUP vote in 2011. There was also a steep decline in the DUP and independent unionist vote.

The new DEA’s bear some resemblance to the old ones (see map). The Northwest DEA (now Dunsilly) has been expanded to include Parkgate ward and a section of Doagh ward and now has a slight Protestant majority. All the town of Antrim is now included in one DEA. The predicted election results are based on the 2011 turnout.

The current Antrim and Newtownabbey councils had the following party strength after the 2011 elections.

The expected party strength in the new council with the new DEA boundaries:

The new council will have 4 fewer councilors and the net party loss would be.

20 thoughts on “Antrim and Newtownabbey”