Over at the “Super Soaraway Sluggerworld” site there have been a number of posts recently on the subject of the current state of the main parties. These have been generally heavy on opinion but light on facts and figures. 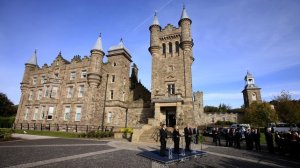 The only facts which actually matter regarding political parties are cold hard Votes so I’ve put some figures and graphs together looking at actual performance since 2003. I have only looked at Local Government, Assembly and Westminster elections as it would be a distortion to include EU or by-elections. I also felt a 10 year timeframe would be a good snapshot.

To place things in context it is important to be aware that voter turnouts have been dropping not just here but in most Western democracies for many years. In 2011 the voter turnout was just  54.5%, a decline of almost 8% from the previous Assembly election and down over 15% from the first election to the Assembly in 1998. Historically the North has had a comparitively high turnout but this is unquestionably dropping. Nevertheless, only real votes actually count.

I have deliberately only focussed on the main parties although I am aware of the fragmentation particularly within Unionism. All votes not going to the named parties below are included in the “other” values.

So lets have a look at the performances in numerical terms first:

Or in Graph format: 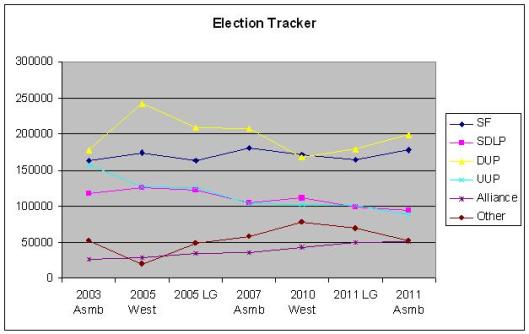 So what can we see from these figures? DUP and SF both holding their votes very well, Alliance doing surprisingly well although with a very limited Belfast centred spread of voters, UUP continuing their decline and the SDLP also declining although at a slower rate. Below are the same results expressed as a percentage of the total vote:

There has been much discussion and speculation as to what is happening within the total voting blocks, lets have a look at the figures if we put the figures together for the primary unionist/ nationalist blocks: 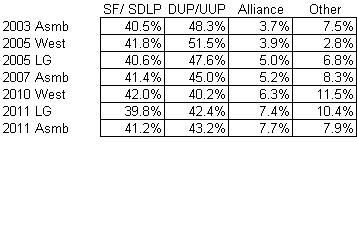 Now things are getting interesting. We can see that what has actually happened is the following. Over the period the Nationalist parties have increased as a percentage of votes cast by 0.7%. The main Unionist parties have declined by 5.1%, Alliance is up by 4% and the rest by 0.4%.

Splitting this back into individual parties and the changes in actual votes and percentages over the period using the 2003 LG figures as a base makes very interesting reading also. Over this period the total valid votes cast dropped by 30,292: 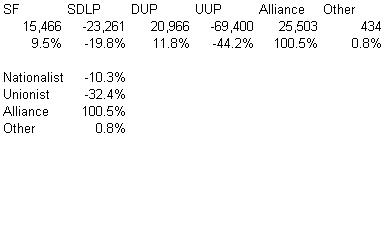 It would appear that while the overall vote is dropping the effect upon the broadly Unionist vote is far greater than upon the Nationalist vote. Alliance appear to have done well but must be viewed in the context of their smaller numbers and limited spread. The “other” category is virtually unchanged which is surprising given the plethora of smaller, mostly unionist, parties emerging. The next round of elections is not until 2015 so, barring surprises such as a snap general election, we may have a while to wait for the next instalment.

I have more detailed figures should anyone have any queries. Have fun with the figures 😉